UL LLC is an American worldwide safety consulting and certification company headquartered in Northbrook, Illinois. It maintains offices in 46 countries. Established in 1894 as the Underwriters’ Electrical Bureau (a bureau of the National Board of Fire Underwriters), it was known throughout the 20th century as Underwriters Laboratories and participated in the safety analysis of many of that century’s new technologies, most notably the public adoption of electricity and the drafting of safety standards for electrical devices and components.

UL is one of several companies approved to perform safety testing by the US federal agency Occupational Safety and Health Administration (OSHA). OSHA maintains a list of approved testing laboratories, which are known as Nationally Recognized Testing Laboratories. Merrill soon went to work developing standards, launching tests, designing equipment and uncovering hazards. Aside from his work at UL, Merrill served as the National Fire Protection Association’s secretary-treasurer (1903–1909) and president (1910–1912) and was an active member of the Chicago Board and Union Committee. In 1916, Merrill became UL’s first president.

UL published its first standard, “Tin Clad Fire Doors”, in 1903. The following year, the UL Mark made its debut with the labeling of a fire extinguisher. In 1905, UL established a Label Service for certain product categories that require more frequent inspections. UL inspectors conducted the first factory inspections on labeled products at manufacturers’ facilities—a practice that remains a hallmark of UL’s testing and certification program.

UL has expanded into an organization with 64 Laboratories, testing and certification facilities serving customers in 104 countries. It has also evolved from its roots in electrical and fire safety to address broader safety issues, such as hazardous substances, water quality, food safety, performance testing, safety and compliance education and environmental sustainability.

In 2012, UL transformed from a non-profit company into a for-profit corporation.

Standards for Electrical and Electronic Products

Standards for Wire and Cable

Standards for Canada developed by ULC Standards, a member of the UL family of companies 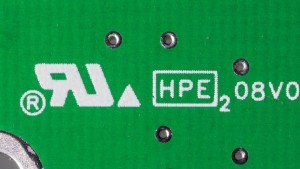 The « Recognized Component Mark » is a type of quality mark issued by Underwriters Laboratories. It is placed on components which are intended to be part of a UL listed product, but which cannot bear the full UL logo themselves. The general public does not ordinarily come across it, as it is borne on components which make up finished products.